Saturday night saw the achievements of just some of our wonderful running groups and leaders from across Wales celebrated as part of the Welsh Athletics Awards Dinner held at the Vale Resort. Each category was hotly contested with 280 nominations received in total.

Run Wales awards – kindly sponsored by our friends at runr:

Cowbridge Moovers is a “free” social (fun) running club.  Within 1 year it’s brought together a large number of people from smaller villages within the Vale of Glamorgan who would not normally run due to the isolated location where they live.  It’s ‘chatty running’ approach giving social benefits in addition to health benefits, the group are great friends meeting 3-4 times a week for running and socially on top of this. Described as “The Most supportive and friendliest group of people” – Cowbridge Moovers has grown exponentially and regularly has up 50 Moovers running, walking or jogging- and always chatting, Great teamwork and hard work have really paid off as the club continues to grow. This is a group that is for all ages and abilities, it’s super welcoming and totally inclusive – “The improvement in everyone’s ability, outlook and motivation has been heartwarming and amazing to see” Dave was nominated by his club – Moti Cardiff

“Dave selflessly gives up him time to several training sessions each week for both Moti Cardiff and CDF runners. So many people with such varied backgrounds, abilities and experience all come along because we thoroughly enjoy our evening challenges – and our socials afterwards. And this is all entirely down to Dave and his tireless positivity.”

“He’s personally made me feel extremely at ease when I was nervous about coming to my first club session due to my slow speed. “

Dave was quick to get on social media as always! – “Thank you to @RunWales & @WelshAthletics for awarding me Group Leader of the Year 2019

I’m hugely honoured & grateful to my club @MotiCardiff who I share this award with, to @CDFRunners & too many people to mention. You know who you are

Geraldine is one of the Run Leaders for the newly formed Cowbridge Moovers. She has done so much for the group including organising all the amazing cow print kit. However, she has had a tough few months with a fractured ankle and recently diagnosed with breast cancer. However, her positive and support to the group members and other Run Leaders has continued. She has still come to sessions on her crutches or in a wheelchair and latterly as a tail walker. Even when she hasn’t been able to train she comes along as support or to take the warm-up and cool down. She also volunteers at park run when she can’t run it. Despite having a lot to deal with she is a huge support to everyone in the group and has become a fantastic friend to all.

also within the Welsh Athletics Awards: 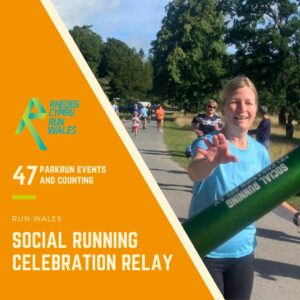