Before Andrew Edwards started running, he was 19 stone 10, at risk of high blood pressure and he had no friends in the local area. Now he has a 5K personal best of 25.41 and a half marathon personal best of 2:21.31.

After having done no real exercise for almost 20 years, Andrew decided he would try and complete the parkrun in Aberdare on 5th August 2018. Andrew said “I remember seeing how effortless the faster runners seemed to be and thinking that I would never, ever be able to do what they could do.” This was also the day that Andrew met his “running alter ego” Robert Matthews. The months to follow saw Andrew bit by the running bug and he continued to lower is personal best month after month.

However, much like all runners, he had his obstacles. On 8th September 2018 he started his parkrun, as usual, excited to cut a few more seconds off his time but when he ran down his first hill, he felt a sharp pain shoot up his right shin. He said, “I just couldn’t run on it. I had to stop and I just burst in to tears. It wasn’t the pain. I just felt that running was over for me and that was it. It was a weird thought, I know, but that’s how I felt. So there’s me, sobbing away and sitting on a park bench. Then a little voice inside me that I had never heard before said “Come on Drew. You’ve started this, let’s finish it.” I have later come to know and love this voice. So I wiped the tears from my eyes and the snot from my nose and got up. I just started to walk round the parkrun and I was determined to finish it.” It was not the time Andrew wanted but the feeling of finishing under the circumstances trumped the feeling of a new personal best that day.

Until October 2018 Andrew was training on his own, but his determination was fading and after seeing the Dragon’s jersey in a lot of his parkruns, he noticed the group atmosphere between them. It was something Andrew wanted to be a part of, so he joined them shortly after his first parkrun in October. He said, “Running with people helped me find that strength to keep going and I will always be grateful for that.” 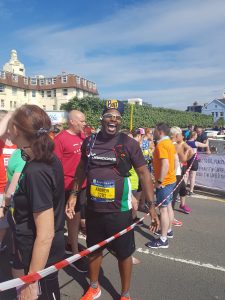 After training with the Dragons for just over two months, Andrew somehow found himself entering his first Half Marathon. He said, “The story of the Merthyr Half began in December 2018, I had been running with the Dragons on a Tuesday, doing my own runs and a running parkrun PB now at 29.08 but I had never run more than 6miles. One of the dragons started to talk about the Merthyr Half Marathon and the mythical unicorn that was a half marathon was so far removed from my world that he might as well have been talking about Kabaddi. To alleviate the peer pressure, every time he would mention it, I would say “Wait till I’ve done ten miles.” So on a dry and cool Sunday morning on 27th January 2019, I put on my trainers and said, let’s do it, let’s get to 10miles. I picked super early, so no one would see me pant and blow and started on my way. It wasn’t easy but 2 hours and 1mins later , I had done it! When I got home, I signed up for one of the last remaining places.”

Since then, Andrew has gone on to run the Cardiff bay 10km, Newport 10km and he’s got plenty of more races planned including another half marathon. Andrew’s story is not original nor epic but it is important. He shows us that determination is stronger than pain and a group atmosphere supports your performance and your strength to keep going.

If you are eager to start your journey and join Andrew, then you can contact the Dragon’s here